Green Glassware: What are you collecting? 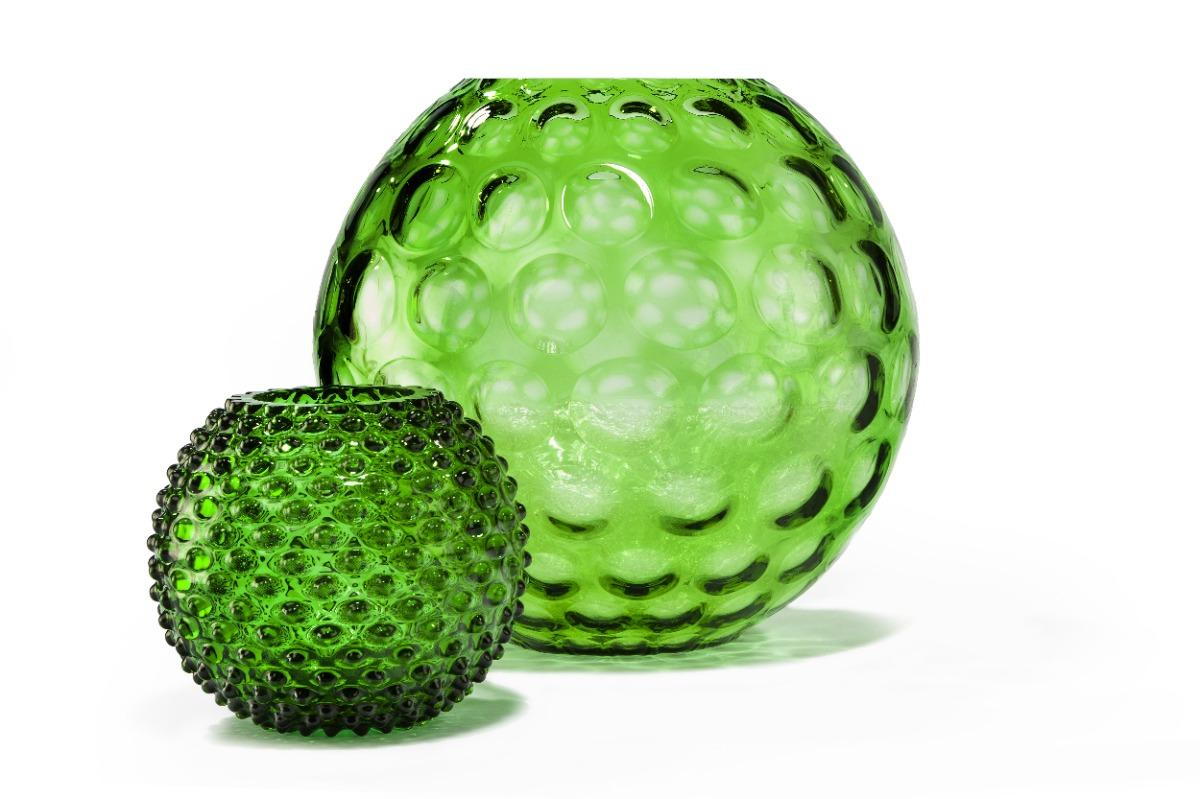 After Aunt Millie and Uncle Henry died, my parents were helping to clean out their house.  Mom and Dad brought home several boxes of items they thought either my siblings or I might want as remembrances of our loved ones. I saw an emerald green glass vase that Henry had given to Millie, and several other pieces of green glassware. I thought they were beautiful, so I took them home and put them on a shelf in my family room.

Interestingly, my eyes began to be drawn towards emerald green glassware.  I saw it at garage sales, thrift stores, and on clearance racks at various home stores.  I started buying a few pieces, and soon had added enough that I expanded to two shelves. Friends and family started noticing how much I liked the green glassware and began gifting it to me, which eventually necessitated expanding to four shelves.  I enjoyed looking at the brilliant color of the glass, partly because Irish green was my Dad's favorite color and it helped me feel connected to him after he died, and partly because it reminded me of the beauty of the woods in spring, one of my favorite places.  I started thinking of myself as a "collector" of green glassware.

A few years later, while traveling through Missouri, we stopped to visit my husband's cousin and his partner.  When I noticed some beautiful pieces of brightly colored glassware on display, I commented about my love of the emerald green glass.  With that, I was invited to open the doors of the dining room hutch and other pieces of furniture in their living and dining rooms and kitchen.  Wow!  It was like being in an antique store for glassware.  One cabinet was crammed full of green glass. Another was filled with blue glass, still another of white "milk glass," another of pink "depression glass," another of gold, and one of red glassware.  These folks were true collectors, and I quickly realized that considering myself to be one was a bit of an overstatement.

We start collecting things because we think they are beautiful or unique, and something about a piece resonates with us. We start wanting more and eventually, little by little, we being to identify with it, and it becomes reflective of something of who we are.  Particularly if a piece is considered to have some value, we think it might be something we can pass down to our children, believing they will value it as much as we do.  If a piece is an old antique, we can even imagine it being passed down from generation to generation. It does not always turn out that way, though.

Not long after our visit, my husband's cousin died of cancer and his partner sold everything at an estate sale.  When they had originally started collecting glassware, going "antiquing" had been a big trend. But that trend started losing its appeal to the younger generation who had come of age and now wanted to be different from their parents.  Old collectibles that had been considered valuable decreased in value, and what might have sold for more at an estate sale in prior years went for less money.  After all those years of collecting different kinds of glassware, the financial gain at sale time was likely not what had originally been expected.

And what happened to my collection of emerald green glassware?  Well, when we moved from Chicago to Arizona, somewhere in that move, two out of four boxes of it got smashed.  I still have some wine glasses, a set of green plates, a few bowls, and yes, I still have Aunt Millie's vase, but most of the other things got broken.  What a disappointment it was to hear the shards of glass as the boxes got moved into the new home, and then to open them to see the ruins of something I had valued.

Over the next few days, as I contemplated what this meant to me, it became easy to say, "It was just things.  If I really want more emerald green glass, I can easily visit thrift stores and garage sales and find more collectibles."  But the bigger questions I started asking myself were, "Is this something I truly want to focus my time and attention on?  Do I really want to keep collecting more things that take up space, that my kids will likely choose to get rid of later, that might get broken, and that can lose their value?"  I decided that I would rather take whatever time I have left on this earth to focus on collecting things that will never lose their value, that will never break, and that could have a positive impact on the world.

As a wife, mom, grandmother, daughter, sister, aunt, cousin, and friend, I can look back over the years and recall a collection of memories of times of togetherness, times of laughter and times of crying, times of giving and receiving love and encouragement, and times of speaking and hearing truth.  Yes, both hard times and good times.  As a life coach, therapist, and a volunteer in my church and community, I have many memories of walking with people on their journey of becoming more of who God designed them to be and becoming freer to carry out their mission on earth.  And as a believer, I have precious memories of communion with and worship of the one who mysteriously and miraculously designed this world and brought it into being, who is the force behind all love on this earth, and who longs to live within us and flow through us to multiply that love.  Perhaps collecting these kinds of memories is a part of what scripture conveys when it says, "Store up for yourself treasures in heaven." (Matthew 6:20)

There is certainly nothing wrong with collecting things that bring us joy, but at some point in our lives, we all start to ask ourselves the questions of, "What did I spend my life collecting?  What did I base my identity on?  Did I give my attention to what was most important, and did I add something of value to the world, or did I focus on those things of less importance?" If we ask those kinds of questions now rather than waiting until time begins to run out for us, we give ourselves the opportunity to re-align our life with our Soul's purpose in being here.

So, what are you collecting?