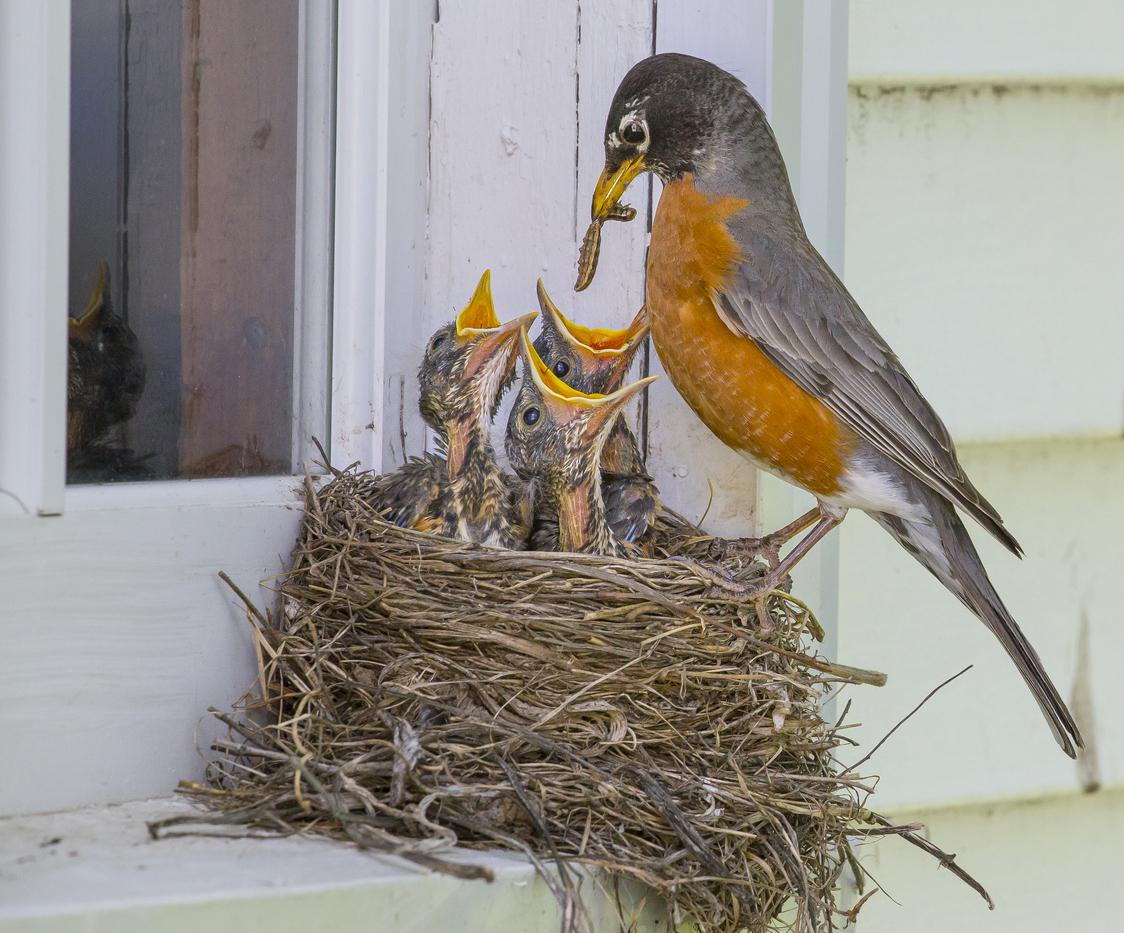 “Mom!” my daughter, Andrea, then a teenager, yelled with exasperation as I slammed on the brakes of the car. “Look, over in that yard! There’s the first Robin I’ve seen this spring,” I exuberantly pointed.

I have a special love for Robins, those red-breasted brown birds commonly seen across North America during spring and summer. Their return each year signals the early stage of a wonderful shift that starts to occur in the Chicago area - moving from winter to spring. During the 40 years we lived there, we regularly experienced that very welcome shift after some long and dismal winters! From the time Robins arrive in mid-March until sometime in mid to late July, every day their song fills the early morning airwaves with a burst of beauty and joy. In the Central time zone, the first bird may start singing as early as 3:30 AM, and by 4:30, many others have joined the chorus. What results is this incredible swell of music that rivals any major choir in the world.

Though I am not normally a morning person, sometimes I would get up around 4:30 just to hear it. Andrea teased me about that, but I knew the music was audible for only a short time, so I did it. Listening to their song was a way of starting my day with beauty and serenity. When I heard the Robins singing in the spring so early in the morning, it evoked something in me that is vital and alive. Outside, the sound would swirl around me, and I would feel a sense of connection with the Creator.

Why do Robins sing? After a trip of sometimes thousands of miles, which may bring them back to the very same territory, maybe even to the same yard, each year, their initial singing in the early spring represents a mating call and an attempt to establish and defend their territory for their summer home. Their music continues as they search for food for their brood of babies still in the nest. Even in the midst of an early morning rainstorm, they still sing. As the baby birds leave the nest to learn the ways of Robin life, their music continues, but as the birds complete the process of raising their young, the music starts to wind down for the season. And as the family tasks are complete, the birds finally begin to prepare themselves for their long migratory journey back to their winter home, some to as far away as South America. At that point, the music stops.

A few years ago, on July 28, I was up early, but I heard only one lone Robin singing. I heard no others, and I knew that soon the early morning chorus would end. When I listened the next day at the same time, I did not hear even that one bird. I felt some sadness that it was over for the year, yet I also felt blessed to have been present on the day that this small yet dramatic change occurred. A shift had just happened that signaled summer would soon be ending, and autumn would begin, and yet it was so subtle that most people would not notice the sign.

What would I have done differently if I had known the previous day would be the last Robin morning song till next Spring? Would I have listened more intently, for longer? Would I have surrendered into the music or been more grateful for the blessing of their song?

That makes me wonder how many other transitions I have missed because I was too busy, or because I failed to simply take the time to notice. Sometimes transitions sneak up on us. We don’t even realize a change has occurred until long after it actually happened, and then one day it hits us. We ask ourselves, “When did that happen?”

If I had known that it was going to be the very last time my son or daughter would ever climb into my lap as a child, what would I have done differently? Would I have treasured the moment more? Would I have held onto them tightly and not let them get down? I know I would have wanted that moment to never end! Truthfully, though, I could not tell you when either of them stopped climbing into my lap. It was like a jolt to my consciousness one day when I suddenly realized that it hadn’t happened in a while, and that I didn’t even know that a transition had taken place. A change of profound significance had occurred in my life without me even realizing it.

So, here is why I awaken early to listen to the morning chorus of the Robins every spring and summer. It reminds me to be present in the moment. It helps me appreciate the fact that, really, now is all I have. I don’t know when I will be called to make the final transition of my life from Here to There, or when that will happen for someone I love. So, the Robins’ song reminds me to intentionally live my best life day by day, purposefully, joyfully and lovingly. Listening to their beautiful music each morning also helps me remember that the One who designed these birds to sing and who guides their passage back and forth between continents, also knows the song I’m to sing with my life, and how to complete that before I journey back to my forever Home.